Marietta Daily Journal - A proposed city of Lost Mountain in west Cobb would not have to levy new property taxes to fund itself, according to a study conducted by the University of Georgia. The proposed city, which would control zoning, code enforcement, parks and sanitation, would instead have an annual surplus from revenue generated by existing fees and taxes, the study’s authors found.

Early this year, a trio of Republican lawmakers introduced legislation that would put a referendum on cityhood before the 70,000-plus people who live within the proposed city’s borders.

One of those lawmakers, state Rep. Ginny Ehrhart, R-west Cobb, praised the study’s findings in a Friday interview with the MDJ. “One of the top questions we got when we talk to folks about it is, are our taxes going to go up? And I think that the answer is pretty clear now: that not only are taxes not going to go up, but that we’re going to have a pretty significant surplus on our hands,” she said. Before a new city can be formed, supporters are required to furnish a feasibility study that demonstrates their would-be city is financially feasible. Or, in other words, that proposed services can be funded by likely sources of revenue. With a feasibility study inhand, Preserve West Cobb, Inc. — the organization pushing for a city of Lost Mountain — now looks to the state legislature, where lawmakers will consider Ehrhart’s bill. (Her co-sponsors were state Reps. Ed Setzler, R-Acworth, and former state Rep. Bert Reeves, R-Marietta. If the bill passes, a referendum on cityhood would go before residents of the would-be city in the spring or summer in 2022, Ehrhart said. That way, should the referendum succeed, they would vote on their new city council members in the fall of 2022.

‘THE VISION FOR WEST COBB’

In interviews earlier this year, supporters said the idea for a city of Lost Mountain was borne out of a desire to wrest control of zoning and other land use decisions from the county Board of Commissioners, who were less likely to value and preserve the semi-rural nature of west Cobb. “There’s been candidates campaigning countywide that have clearly said, ‘my campaign’s based on more industrial in west Cobb, higher- density development … (a) countywide transit focus,’” Setzler has said. “It’s absolutely within someone’s right to have that vision. Is that the vision for west Cobb? We believe the answer is no.” Board of Commissioners Chairwoman Lisa Cupid pushed back, saying she had been mindful of the character of west Cobb during her years as a county commissioner. She added the board usually defers to a district commissioner when making land use decisions. Cityhood movements in east Cobb and Vinings also cite as a motivating factor zoning and a desire to preserve those areas as they are. A third cityhood movement, in Mableton, is also motivated by land use decisions. But supporters there have said they hope to encourage, rather than limit, higher-density development.

Although zoning is the key issue, Ehrhart said, cities are required by state law to offer at least three services. In the case of the city of Lost Mountain, other services are code enforcement, parks and recreation and sanitation. “Everything we have done is based on feedback we’ve received from citizens in west Cobb, what their concerns are about their neighborhoods,” Ehrhart said. “Waste management, sanitation, trash pickup — that’s been near the top of the list. We have a lot of folks in west Cobb dissatisfied with their trash service.” Unlike Cobb’s other cities, Lost Mountain would not provide its own police or fire services and would instead continue to rely on the Cobb police and fire departments. The “city-lite” model touted by Ehrhart and other supporters goes beyond the limited set of services the city would offer. The city would not build a grand new city hall. Instead, Ehrhart envisions a city government working out of existing office space in west Cobb. The closest thing the wouldbe city has to a downtown is the intersection of Due West, Acworth Due West and Kennesaw Due West roads, right beside Due West Elementary, Ehrhart said. “It is not what I would (call) a traditional city, but then again, remember ... we’re not looking to create a traditional city,” she said. “We’re looking to create something that is very well defined and limited in scope and function.”

The study area has more than 74,000 people, 13% of the population of unincorporated Cobb, and 13.5% of the assessed property value. It is relatively wealthy, however, with a poverty rate less than half that of the county as a whole and a median household income of $118,000, compared to Cobb’s $77,000. The city of Lost Mountain could raise about $12.5 million in revenue each year and spend about $9.1 million, leaving a $3.3 million annual surplus, according to the study’s authors. Revenues were based on money collected by the county within the proposed city’s borders “as well as projections for franchise fees and other revenues,” according to the study. The single-largest revenue source would be a state tax on insurance premiums, which the UGA team estimated would collect $4.6 million per year for the city of Lost Mountain. Georgia levies a tax on insurance premiums. When insurance policies are bought in unincorporated areas in Georgia, revenue from the tax goes to the state, Ehrhart explained. But when those policies are bought in cities, revenue from the tax goes to the city in which it was purchased. The second and third largest revenue sources are franchise fees and a motor vehicle tax, which would collect $4.2 million and $2 million, respectively. Cobb already levies motor vehicle taxes and franchise fees, though the amount it raises from the residents in the proposed city of Lost Mountain likely differs from the amount UGA researchers estimate the city would raise, given assumptions the researchers had to make in order to calculate city revenue.

Expenses were based on the cost of services in cities of similar size: Marietta, Smyrna and Peachtree Corners. Parks and recreation would be the single most expensive service, costing the city about $3.7 million per year, according to the study’s authors. A community development department in charge of zoning and code enforcement would cost $1.6 million, while indirect or support services, such as accounting, purchasing, human resources and such would cost about $2.2 million.

The study’s authors note they were conservative in their estimates. Ehrhart thinks they could have gone even further. Noting that the study estimated the new city would need 30 employees, Ehrhart said that was “too generous.” “We don’t need that many employees,” she said. “I think we could do it even cheaper than is indicated in the feasibility study.”

Ehrhart said the study cost about $24,000 and the only two funders were herself and Reeves.

But Preserve West Cobb will begin its fundraising effort in earnest next week. A fundraiser — Ehrhart declined to say on the record when or where it would be, concerned the location didn’t have the capacity for a surge in attendees — will raise money for flyers, internet ads and the like. “Our focus is all on educating as we head into the referendum,” she said. “And I’m very optimistic this will pass.” 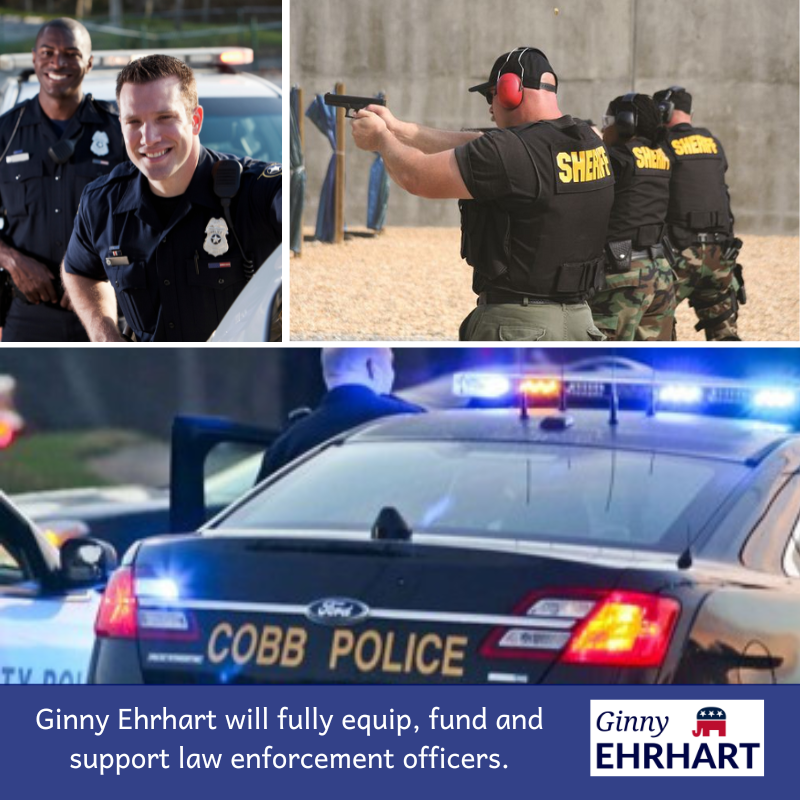 "GA State Rep @GinnyEhrhart proposed the "Vulnerable Child Protection Act" that would make it illegal to "radically change" the gender of a child through surgery or drugs in their state.  I applaud her stand to protect children." - Franklin Graham MDJ Opinion: Two Grinches Walked Into a BOE Meeting (aka Don't Shove our Seniors' Security Up the Chimney) Ouch!! She left a mark with that one.  Ginny Ehrhart sets her opponent straight about independent women and treating transgender students like adults. Ginny Ehrhart defeated Tom Gray in Tuesday’s Republican runoff. “I have specific, tangible solutions to some of the problems people are concerned about out here,” she said. “I think that’s how I differentiated myself in this race." SPEAKING OF EHRHART, what to make of the race for his seat now that the veteran lawmaker is retiring and his wife, conservative Republican Ginny Ehrhart is running in his place against progressive Democrat Jen Slipakoff?
Around Town rang Kerwin Swint, director of KSU’s School of Government and International Affairs, for some answers. As it happens, Swint lives in west Cobb and knows the area well.
“That particular district is just so Republican. It’s very conservative, it’s economically conservative definitely and still, even in 2018, still mostly social conservative. You have a hard time seeing how a Democrat could possibly be competitive there. So I start off from that standpoint that it’s just a really Republican-friendly district to start with. I think that’s the biggest factor,” Swint said.
So the odds on favorite, it would appear, is Ginny Ehrhart.
“I would agree,” Swint said. “My interest in protecting families and preserving our way of life has always motivated me, but my service until now has been directed to my family and within my own sphere of influence,” Ginny Ehrhart said. “I have always followed politics, and now I have the time and opportunity to make my service count for my neighbors in west Cobb and across the state. As a state representative, my goal is to impact the Legislature in a way that ensures the lives of all Georgians will be more positive, productive and prosperous. I will work hard under the Gold Dome to make this a reality.” I was present in Cobb State Court Friday to witness the best possible outcome of the school bus violations issue. A huge thank you to State Court Clerk Angie Davis for establishing a new records process that gives judges no excuse to not enforce the law. Great things can happen when great women do the right thing! My quotes in today's Marietta Daily Journal represent the concerns of many Cobb parents. Thank you for the support so many of you have extended. I am hopeful that this week, as the court addresses a new batch of school bus violators, there will be no repeat of last week's dismissal of charges. Hold them accountable. Our kids deserve nothing less.

Thank you for signing up!

MDJ Opinion: Two Grinches Walked Into a BOE Meeting (aka Don't Shove our Seniors' Security Up the Chimney)